Who Invented the Monkey Wrench?

There has been a lot of misconceptions concerning who invented the monkey wrench. The term, monkey wrench , also has a lot of uncertainties surrounding its origin.

If you prefer learning by video, watch here:

Many articles available online give credit to Jack Johnson. He was a boxer. An American heavyweight champion and the inventor of a monkey wrench.

Jack Johnson was a black American champion who ruled the boxing world in the early years of the 20th century. His dominance in the world of boxing was a wonder.

He was dominating at a time when racism against black people was at its peak in America. At that time, white supremacy was the order of the day.

Jack Johnson was so wealthy and physically strong that he almost lived above the racism that other black people experienced then. He was over 6 feet tall and had an imposing structure. His presence in the ring caused his opponents to shiver.

In the early 20th century, the concept of equality between black and white was unheard of. It had been believed that the whites were superior in everything to the blacks. In academics, politics, governance, sports, achievements, religion, civility, carriage, and in physical strength, the whites reigned.

But Jack Johnson proved them wrong. He was a force, bludgeoning anything that stood in his way. He started off as a ring fighter in Texas where he was born, and always had fellow blacks as opponents. They fought in fighting pits like Roman gladiators for the fun of white spectators and sponsors.

When Jackson was a teen, he worked as a hand on boats, cleaning boats for the use of the whites. In 1897 however, he became very serious with boxing and was rapidly gathering reputation.

At the turn of the 20th century, in the year 1903, he faced the black champion. The match lasted for 20 rounds before he could defeat Ed Denver Martin.

His tile was the heavyweight champion for the colored world and that was not satisfactory for him. His wish was to conquer the world.

He wanted to dominate everyone especially the whites and so he entered the boxing world and opted to fight against the whites. He felt he was the most dominant boxer in the world.

Johnson wanted to fight the whites so he could punish and disgrace them. His selling point was his devastating punch that knocks out opponents as if they were nothing.

He entered the ring and decimated the so-called supreme whites. He disgraced and made a jest of them in the ring, right before the white spectators.

This was a hard pill for the whites to swallow. How could an inferior black man constantly humiliate them? But they could do nothing to Johnson himself. He was physically stronger, and he was rich. His wins won him lots of money.

The whites then took out their frustration on other blacks who were poor and powerless.

Bob Fitzsimmons, a former boxing champion fought him on the 17th day of July 1907 and was severely wounded. Johnson won in the second round.

The whites were looking for someone who would beat Johnson, so they coerced Tommy Burns, the reigning white champion to fight him. He agreed unwillingly, at the promise of thirty-thousand dollars.

Johnson thoroughly beat Tommy. So much so that a police officer had to end the fight at the 14th round.

This caused whites to assault blacks even more. But Johnson roamed free, did whatever he wanted. In a time where blacks and whites were forbidden to marry, he dated and married white women.

Jeffries James J., the previous champion came back to boxing just to see if he could beat Johnson, but unfortunately for him, the match was unbalanced. James was beaten to a pulp. This was on the 10th day of July 1910. Whites started a riot that claimed the lives of 19 people.

Two years later, Johnson was framed for smuggling a white woman for the purposes of prostitution. But the woman he was accused of smuggling from state to state was his girlfriend, whom he got married to later in the year.

He appealed the accusation called Mann act charge that was labeled against him and to avoid being punished for a crime he did not commit, he escaped to Europe. His wife, Lucille Cameron went after him. He lived in Spain and Mexico till 1920.

He was still the champion even when he was in Europe, but he finally lost in 1915 at the twenty-sixth round in Cuba against one Jess Willard. In his book, he said he did not lose willingly. He was coerced. He was assured forgiveness if he lost.

In 1920, he got fed up being a fugitive and living in shacks. He came back to the US. He was remanded in Leavenworth Prison located in Kansas.

It was in this prison that he got the inspiration for the wrench he invented in the year 1922.  He was thinking of a device that could be used to loosen or fasten nuts and bolts .

The patent was granted to him.

Johnson was later released, and he continued boxing until the year 1945. He died in a vehicular accident while going to watch a fight.

But the wrench had already been in use before Johnson conceived his own idea. In fact, the first person to have made the wrench and the reason why it is called a monkey wrench still raises debate amongst historians. 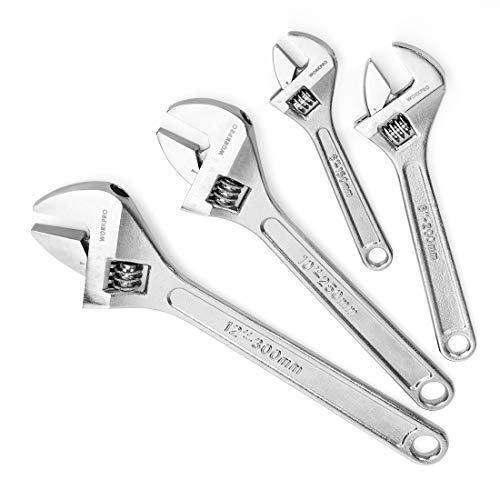 Buy a monkey wrench on Amazon

In 1835, Solymon Merrick purportedly made the very first wrench. He was mimicking the tools of the ancient men and made the wrench. People loved it because of the way it helped them remove bolts without much stress. He sold his patent to Bemis and Call, a company that produced tools in the United States.

Loring Coes was another man who was said to have made the first monkey wrench. Other wrench forms have been available before this. The English people already had wrenches that were used to reset the wheels of carts.

These wrenches were also sent to the US and neighboring countries in the 18th and 19th centuries.

At about 1840, in Worcester, Massachusetts, a man who was popular for making kitchen utensils, knives particularly, produced a wrench. The name of the man was Loring Coes. The patent for the wrench was granted to him in the year 1841. The wrenches were sold as monkey wrenches.

It is also worthy of note that the expression monkey wrench had already been used in England.

Years passed and the wrench was continually modified both by Coes and others. Coes even sold their wrenches with knives that had wooden handles, still refusing to let go of the initial equipment the company manufactured.

Other companies that sprang up after Bemis and Call also used the same pattern of Coes to make wrenches until the year 1965.

People still use the monkey wrenches up to this point. They are usually used for heavy-duty work.

Another name that would always pop-up when the creation of the tool is being discussed is the man, Charles Monkcy. Some records, like the Jim Crow’s, attribute the invention to him. Charles was an engineer in Baltimore. He was said to have invented the monkey wrench in the year 1858.

How Did Monkey Wrench Get Its Name?

As was earlier mentioned, there are many stories regarding the reason why the tool is called a monkey wrench.

Some sources suggest that the name, monkey wrench, was a racist name. The white people named it so when the invention of Johnson saw the light of day. It was said that white supremacists turned it into a derogatory term, “monkey wrench.”

Blacks were called monkeys, apes and other dehumanizing terms. Hence, it was befitting to give a derogatory name to a wrench made by a black.

A Misspelling of The Name – Moncky

Some suggest that the name was from a misspelling of Charles Moncky, the alleged monkey wrench inventor of 1858. This theory is unstable and is denounced by most historians

Meaning of Monkey in the Dictionary

In the dictionary, words sometimes have different meanings. Let’s assume that you go about enquiring from random people the meaning of monkey. You are most likely to get answers that are related to the animal, monkey.

But in some dictionaries, apart from it being an animal, there are other meanings of monkey. In some, it is defined as a little and thin construction. In some others, it is a part of an instrument that is built to serve a quick purpose.

This makes more sense than any other reason that has been listed above. A wrench is an equipment that can be quickly and conveniently re-adjusted at any time to fit a particular purpose – perhaps to work on a nut or bolt that a workman wants to lose or tighten.

Based on this, it is more reasonable to say that the dictionary meaning is the reason why the equipment is called a monkey wrench since it is easy to manipulate for various reasons.

Prices pulled from the Amazon Product Advertising API on:

Product prices and availability are accurate as of the date/time indicated and are subject to change. Any price and availability information displayed on [relevant Amazon Site(s), as applicable] at the time of purchase will apply to the purchase of this product. How To Use Crowfoot Wrench What Does the Wrench Light Mean on a Ford

How To Remove A Faucet Aerator Without A Wrench

We use cookies on our website to give you the most relevant experience by remembering your preferences and repeat visits. By clicking “Accept”, you consent to the use of ALL the cookies.
Cookie settingsACCEPT
Manage consent

Any cookies that may not be particularly necessary for the website to function and is used specifically to collect user personal data via analytics, ads, other embedded contents are termed as non-necessary cookies. It is mandatory to procure user consent prior to running these cookies on your website.